Born in 1840, David “Crockett” Maples would grow into a 6-foot-3, blue-eyed, blonde-haired young man who enlisted in the Company H, Ninth Tennessee Cavalry in 1863! Maples would go on to serve as a private and corporal in the Union military until 1865. The Ninth Tennessee Cavalry was assigned to small communities in Southwest Virginia, Eastern Kentucky and East Tennessee. Crockett was honorably discharged when the company went out of service in 1865.

2. Humble Beginnings of a Restaurant When Crockett returned home from military service in 1865, he and his wife Mary R. Ogle put food on the table by opening a small supply store at the base of Mount LeConte! Over time, Crockett and Ogle would gain a reputation for being humble people who would always serve up home-cooked breakfasts for hungry travelers in the Smoky Mountains! Today, Crockett’s Breakfast Camp aims to serve customers with the same care and hospitality that Crockett and Ogle once did!

3. Consequences of the Cold

Ever the mountain man, Crockett was often asked to guide travelers through the rugged mountains. One winter, while guiding a salesman to the top of a mountain and getting separated, Crockett became stranded in a blizzard and nearly froze to death! His legs severely frostbitten, Crockett would eventually have his legs amputated! Crockett was anything but deterred! Instead, he fashioned boots with wooden feet that he tied to his legs to act as a prosthetic. Relying on two canes and his wooden feet, Crockett would remain active until he died in 1928 at the age of 88. Crockett’s willingness to always lend a helping hand became an inspiration to neighbors, friends and the community! Today, a wooden statue of Crockett sits outside of Crockett’s Breakfast Camp, serving as a symbol of how resilience and determination can help anyone overcome adversity that comes their way!

What To Expect When You Visit

What isn’t to like about the food at Crockett’s Breakfast Camp?! Made-from-scratch biscuits, fluffy, thick golden brown pancakes, stuffed french toast, piping-hot skillets, perfect waffles and scrambled creations have made Crockett’s a go-to spot for breakfast in Gatlinburg!

Step inside our restaurant and you’ll immediately feel welcome as cozy mountain vibes travel through your being! Bales of hay, cotton sacks, aluminum pans and Ball jars with lights inside serve as decor to create an unmatched environment! All the doors inside use a pulley system weighed down with a cotton sack full of sand! 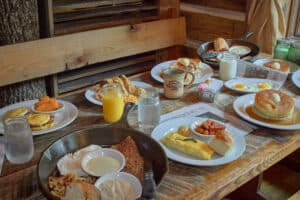